Portoro Marble is a very valuable stone with a deep black background and yellow-gold veins. The area of extraction is La Spezia, more precisely Portovenere.

The name Portoro derives from the Italian translation of the French term “Porte d’or” (Golden Door) by which it was called during the French domination.
Originally the name was “Misto giallo e nero” (mixed yellow and black), later it was called “Giada di Portovenere” (Portovenere Jade).

Portoro is a stone of great character and beauty: its originality and elegance make it suitable for fine claddings and modern furnishings such as fireplaces, columns, sculptures and tops. 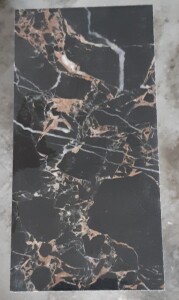 Its optimal finishing is polishing and antiquing.

The fundamental detail of Portoro marble, apart from the golden veining, is the background colour, which must be as dark as possible until it reaches the so-called “sepia black”: this characteristic decisively changes the optical effect of the material itself when it is polished and laid. Portoro marble has been used for centuries in all kinds of high-level workmanship, in fact it is also found in the most beautiful historic Italian buildings.

Geologically, it is a limestone with carbonate limonite veins, formed in a calm, deep, low-oxygen marine environment rich in organic matter.

Want to join the discussion?
Feel free to contribute!

What is ‘lightened’ marble?